The Workflow App – Why You Should Get It

When the iPad was first released a few years ago, it was envisioned primarily as a device for consuming content, like a really really flexible Internet-connected futuristic book. To this day, the iPad is still great for that very purpose, but it’s potential has expanded far beyond that, becoming more and more a viable platform for getting work done. This is thanks in part to the ever increasing power and speed of the hardware, but also due to innovative apps that make possible a lot of things that we couldn’t do before. One of these apps is Workflow.

Amidst a few apps that broke the ice in the iOS automation department,such as Pythonista, Drafts and Editorial, workflow came out not long ago as what could be called an iOS version of Apple’s Automator. I’ll be the first to admit I got very limited use out of Automator, partly because it was pretty slow to load when I had one task I used it for a few years ago, and partly because I couldn’t find any use for it that I didn’t feel I could’ve accomplished in the time it took me to load up the app and run the workflow. But workflow is different. iOS is a different beast altogether, and in my mind, the whole nature of a touch-based OS leans a bit less towards the realm of power-use and much more towards coffee table use. So if you’re going to bring serious get-work-done features to a coffee table platform, it has to be done in a way that is efficient and easy, otherwise users will wait until they get back to their desktop or pull out their laptop to do what they want to do. This is especially true in the case of a phone. Workflow is useful as an app because:

A) The interface is easy, it’s flexible, and it leaves the user with a lot of options to find something that’s useful to them in the whole plethora of possibilities it provides.

B) It lets you create workflows for things that you couldn’t previously do with iOS and make them easily accessible in the contexts you need them in. 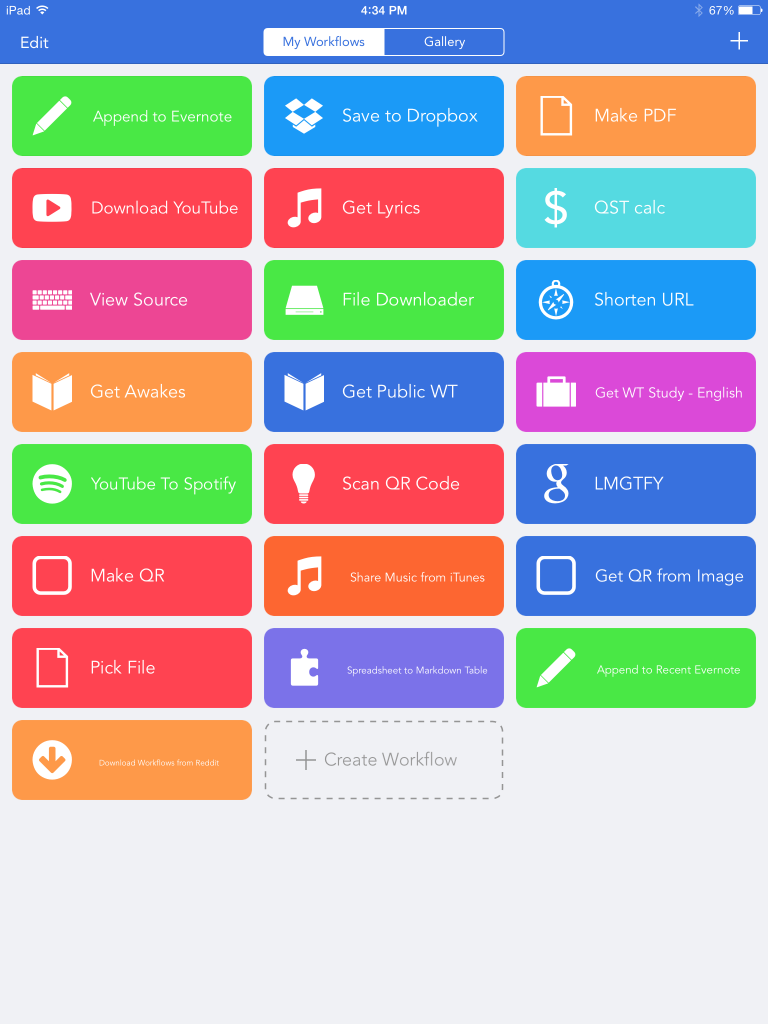 Its interface first opens up to a screen that lets you choose from the workflows you create. It’s all very colourful, which gives it charm in my opinion. But beyond aesthetic, it gives you a drag-and-drop interface in which you can search for and select the tasks you want to accomplish and chain them together to get it to do what you want. Kind of like a “build your own app” app. I’ve created useful workflows just with a couple of the functions, but a lot of power lies in its ability to create loops and store variables. It also can send data to other apps via a url scheme. In laymans terms, it has a lot of stuff that gives you a lot of possibilities to do cool stuff real quick. Examples?

The list could on for awhile. Check out workflow gallery for more examples.

Is it really even useful for the layman though? Honestly, it probably tends to be more appealing for a techie / programmer type person like myself. However, it doesn’t take a programmer to get something useful out of it. Workflow provides a gallery where you can download quite a few remade workflows and run them without any technical knowledge. Any of your programmer friends can easily share workflows they make. And the online community around workflow is growing every day, which means there’s a lot of people out there working on creating useful workflows that you can download and use out of the box.

So what about integration with me whole iOS ecosystem? Workflows can be created as “extensions” which mean they can be accessible from the share menu of any app that may want to use it. Plus, you can create them as icons on your home screen for fast access. I myself created an icon on my home screen to launch a workflow for scanning a qr code. Without a doubt, a lot of workflow’s power can come from its ability integrate with apps like Launch Center Pro, Drafts and IFTTT.

Oh, and did I mention, one of the biggest things about Workflow, is how small the price tag is. For $2.99, I’d definitely say it’s a worthy addition to an iPad’s home screen. Check it out on the App Store.