One thing I seem to hear a lot is “My iPhone battery doesn’t last very long.” to be honest, I had that problem when I first got my iPhone too. But now I rarely have a problem getting it to last the whole day. So here are a few tricks I learned that hopefully can help you get through the day without having to dash in a mad panic for the charger to keep your beloved Siri from passing out.

1. Check what’s killing your battery
Possibly the most logical way to eliminate drained battery problem is to target whatever it is that’s killing your battery. Thankfully iOS8 brought along with it a tool that helps you do just that. It can be found in Settings > General > Usage > Battery Usage. It shows you the percentage of battery that has been used by each application in the past 24 hours. You can also see the averages of the previous 7 days. If you see that something like Instagram or Facebook is using 25% of your battery life, you may want to be aware that when you have low battery, checking the latest wall posts may not be the best idea, especially if you’re on 3G. 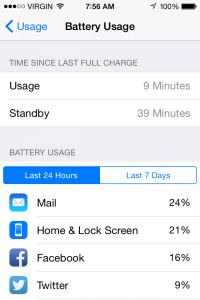 2. Turn Off Background App Refresh
What is background app refresh? Basically it means that even if you aren’t using a particular app, it might be pulling data from the internet in the background. In other words, even though you may not be doing anything on your phone, multiple apps might be. So how can you see which ones can or can’t? Just go to Settings > General > Background App Refresh. Here you can either shut off background app refresh for all apps, or just target specific ones. For example, if Facebook is taking 25% of your battery power, it could be in part due to Facebook always pulling information in the background. Personally, I like to leave it on for things like Mail and shut it off for social network apps like Instagram. Keep in mind that shutting it off doesn’t mean that you won’t get notifications from that particular app. It just won’t be fetching other data when you don’t want it to. 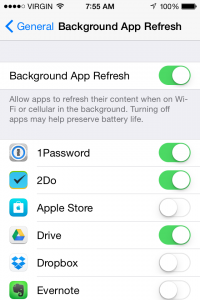 3. Be aware of wireless (3G/LTE, WiFi, Bluetooth)
If you’re getting close to the end of the day and you need to save your battery as much as possible, it helps to be aware that whenever your phone uses anything wireless, that takes battery. In general, Wifi is not the biggest culprit, but things like web browsing or “Instagramming” on 3G can really drain your battery. It doesn’t mean that you can’t do those things ever, but if your battery is running low, it’ll last significantly longer if you’re not surfing on 3G. Shutting off Wifi or especially Bluetooth when you don’t need them can help too. If you really want it to last a long time, you can put it on Airplane Mode, but that will prevent you from receiving texts or phone calls too, so that’s not always the most practical solution, but it can definitely help in a pinch.

4. Quitting your apps doesn’t help
One thing a lot of people have learned to do over the years is to quit all the apps that are open in the background to save battery life. This is actually a misconception. It may help you keep more organized and clear up the clutter in your multitasking list, but it won’t save any battery life. While the app may still be in memory iOS puts it in “Suspended” mode, which means it no longer has any running processes (with a few exceptions, for example, if it’s currently downloading something). So basically, the only thing quitting your apps really does, other than possibly helping you feel like a more organized person, is keep your screen on. And your screen being on actually does drain battery life.